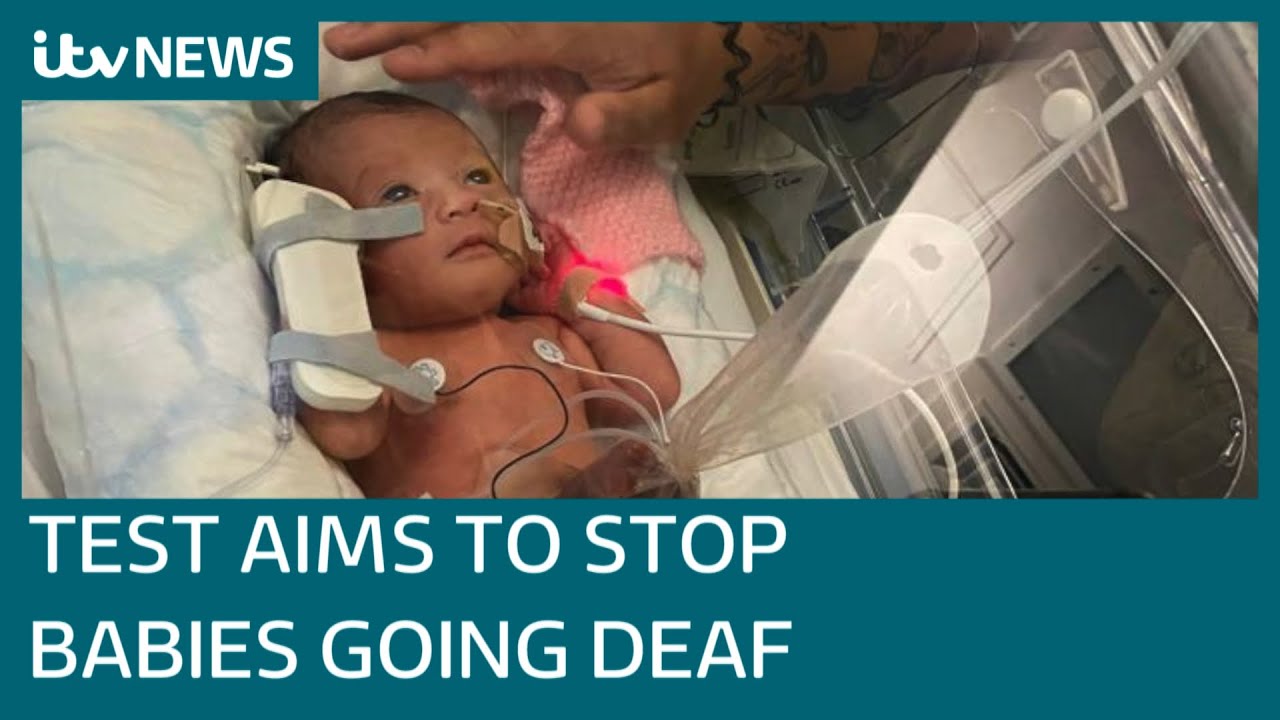 Taking just 25 minutes, the bedside machine identifies whether a critically ill baby admitted to intensive care has a gene that could result in permanent hearing loss if they are treated with a common emergency antibiotic.

The new swab test technique would replace a test that traditionally took several days and could save the hearing of 180 babies in England alone every year.

People admitted to intensive care are usually given an antibiotic called Gentamicin within 60 minutes. While Gentamicin is used to safely treat about 100,000 babies a year, one in 500 babies carry the gene that can make it cause permanent hearing loss.

Developed in Manchester, the new test means that babies found to have the genetic variant can be given an alternative antibiotic within the ‘golden hour.’

It is expected the test could save the NHS £5 million every year by reducing the need for other interventions, such as cochlear implants.

Mary said: “Khobi was born with her bowel outside her tummy, which put her at risk of infection - she needed antibiotics quickly but was given this new genetic test which showed she was susceptible to hearing loss from gentamicin.

“She was given an alternative antibiotic which didn’t affect her hearing, and it worked well. She’s doing fine and is such a happy, sociable baby.

“This test is great, and I think all babies should have it.”

NHS national medical director Stephen Powis said: “The successful trial of this bedside test is fantastic news for the hundreds of babies - and their parents - who would otherwise lose their hearing when given this common antibiotic in intensive care situations.

“Through world-class innovation, the NHS is delivering cutting edge treatments to save and improve patients’ lives as well as delivering on the commitments of the NHS Long Term Plan.”

Professor Bill Newman, a consultant in genomic medicine at Manchester University NHS Foundation Trust and Professor of Translational Genomic Medicine at the University of Manchester, led the Pharmacogenetics to Avoid Loss of Hearing (PALoH) study.

He said: “I am absolutely thrilled with the success of the study, and that this testing is now going to be used in three of our Trust’s Neonatal Intensive Care Units -  it’s actually going to make a real difference so babies are not going to lose their hearing for a preventable reason.

“The trial demonstrated that you can deploy rapid genetic testing in a clinical setting, and that the tests can be carried out within the ‘golden hour’ when severely unwell babies should be treated with antibiotics.”

Around 300 nurses are being trained to use the machine across MFT at Saint Mary’s Hospital, Wythenshawe Hospital, and North Manchester General Hospital, and the test is expected to be routinely used in all the hospitals’ neonatal units within weeks, which are part of Saint Mary’s Managed Clinical Service within the Trust.

Professor Dame Sue Hill, Chief Scientific Officer for England and Senior Responsible Officer for Genomics in the NHS, said: “Genomic medicine is transforming healthcare, and this is a powerful example of how genetic testing can now be done extremely quickly and become a vital part of triage - not only in intensive care but across our services.

“It also shows the importance of thinking about how advances in technology can rapidly transform how we use genomics closer to care for our patients.”

Professor Newman, who is Associate Lead, Hearing Health Genomic Solutions at NIHR Manchester Biomedical Research Centre (BRC), said the team had successfully transferred the accuracy of the machine in the lab to working effectively in a ward. At the same time, clinicians adapted quickly to incorporate the test into their routine care for very sick children in the neonatal ward.

The idea for the test came five years ago, and trials started in 2020 with further adaptations and fine-tuning so that the current machine, which is called the Genedrive System, is now fully CE certified to be used in a clinical setting.

Study results were published in JAMA Pediatrics – the top-ranked paediatrics journal in the world – last week.

Backed by £900,000 funding from the National Institute for Health Research (NIHR) and support from the charity Royal National Institute for Deaf People, the Genedrive System, which costs £80 per baby, was developed by Genedrive, a start-up based at the University of Manchester. It was developed in close collaboration with Professor Newman’s team at Manchester Biomedical Research Centre.

“Up to now the genetic test has taken too long to return from the lab to be useful for babies requiring urgent treatment but a rapid test will be a game-changer.”

David Budd, CEO of Genedrive, said: “There is a significant drive within the NHS to alert healthcare professionals to the impact of antibiotic-induced hearing loss and encourage them to consider genetic testing prior to initiation of treatment.

“It’s a great example of using human genetics to guide specific therapy, which is now taking front and centre in clinical management globally. The application of Genedrive’s technology shows how a rapid, affordable, point-of-care test could impact patients’ treatment and quality of life across this as well as a wide range of fields.”

Minister for Innovation, Lord Kamall, said: “Genomics is changing the future of healthcare - from detecting new variants of Covid to enabling more targeted treatment of illness.

“This innovative new test has the potential to prevent life altering and preventable side effects for babies and keep the NHS ahead of the curve in delivering state of the art care.

“The UK continues to lead the way in genomics expertise and is paving the way for earlier diagnosis of conditions in children and faster access to the right treatment.”