Manchester Gorton MP Afzal Khan has taken part in a huge research project to help improve health outcomes for South Asian people and is encouraging others to participate as well.

Afzal took part in the Genes and Health Study which is trying to understand why people of Bangladeshi and Pakistani heritage have some of the highest rates of heart disease, diabetes and poor health in the UK. He got involved during a visit to meet the local team from the National Institute for Health and Care Research (NIHR) Clinical Research Network Greater Manchester, based at Manchester University NHS Foundation Trust’s Oxford Road campus.

Over 50,000 people in London and Bradford have already taken part in the Genes and He 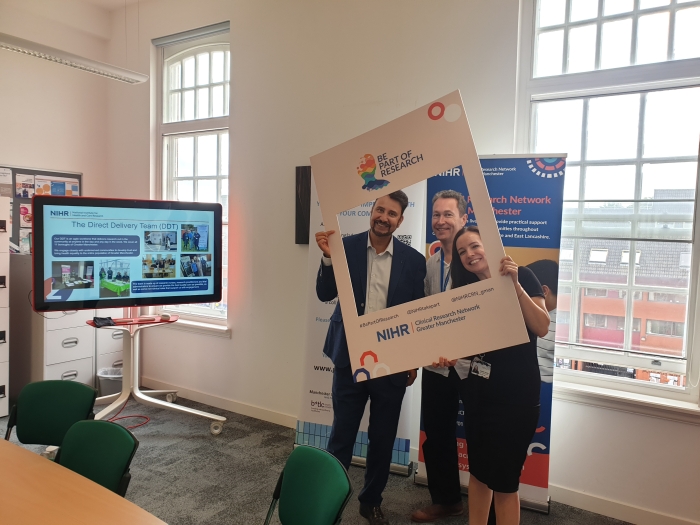 The study opened in Greater Manchester earlier this year and hundreds of local people of Pakistani and Bangladeshi origin have been participating during the NIHR’s regular visits to community locations such as markets, places of worship and festivals.  To take part, Afzal provided a small saliva sample and completed the two short forms.

Afzal Khan MP said: “I was delighted to play my part by taking part in this important genetics research study and it was really quick and easy to get involved. Our South Asian communities are currently underrepresented in research. But by providing a small spit sample and some brief details, we can help address this imbalance and help researchers better understand the links between our genetics and the health conditions prevalent among people of Pakistani and Bangladeshi communities in the UK and worldwide.”

Jo Henry, Lead Research Nurse at NIHR Clinical Research Network Greater Manchester, said: “We know that, unfortunately, South Asian people have some of the highest rates of heart disease and diabetes in Greater Manchester and across the UK, and had the worst COVID-19 outcomes.

“Genes and Health is a study that is making real progress in reducing these health inequalities and providing a very accessible way for people to be part of research that can benefit so many people. Afzal has joined hundreds of local residents by kindly volunteering for the study and we are working hard to visit lots of community locations to give as many local people as possible the opportunity to be part of this important research. Taking part is really straightforward and takes less than 10 minutes.”

People from South Asian communities have historically been underrepresented in the large genetic data sets used by scientists, doctors, and policymakers to guide decisions about healthcare. The Genes and Health Study is addressing this by recruiting volunteers aged 16 and over from British Pakistani and British Bangladeshi heritage.

The project, led by Queen Mary University of London in partnership with King’s College London, started in East London in 2015 and opened in Greater Manchester earlier this year.

Data from the Genes and Health Study has already been used to uncover important scientific discoveries such as: why COVID-19 affects some people more severely than others; a new treatment for a rare childhood kidney disease; and a new understanding of how nutrition links to childhood growth.

Further information is available on the NIHR Clinical Research Network Greater Manchester website. Anyone interested in taking part in the Genes and Health Study can contact the local team on genetics.research@mft.nhs.uk

Everyone is welcome to attend the drop-in event, where there will be opportunities to take part in the Genes and Health Study, learn about other research participation opportunities, and speak with local health and wellbeing support organisations.